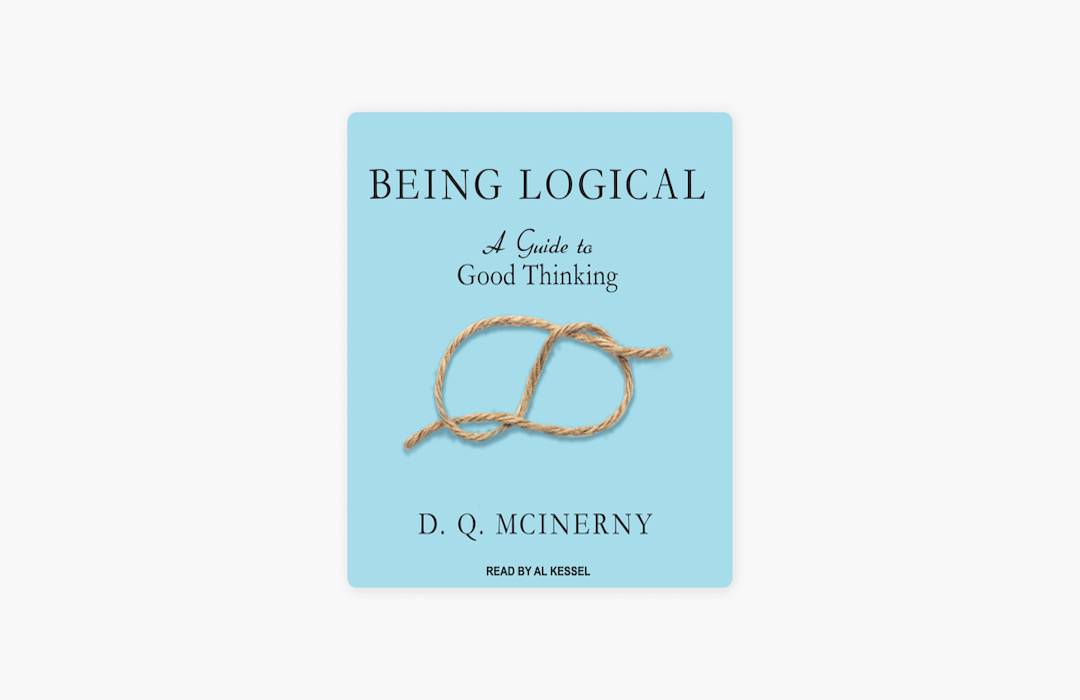 The pervasive appeals to emotion over logic in advertising, newspaper articles, and social media posts reveal a fundamental inability to compose cogent argumentation, conduct precise analysis, and construct judicious synthesis. D. Q. McInerny wrote Being Logical: A Guide to Good Thinking as an attempt to counteract this lamentable reality.

McInerny received doctorates in American Studies (University of Minnesota) and Philosophy (National University of Ireland, University College Cork) and has taught logic to college students for over four decades. In his view, “logic is the very backbone of a true education, and yet it is seldom taught as such in American schools” (ix). In other words, learning about learning and thinking about thinking are the most important parts of education, yet they remain conspicuously absent in the modern school system.

McInerny’s goal in Being Logical is to provide a practical guidebook with basic principles of logic that is accessible to those considering the subject for the first time (x). His goal is not to argue for a theory of logic but to develop practitioners of logical thinking. In keeping with this aim, he speaks clearly and, at times, informally, giving the reader a sense of a personable teacher in the classroom.

The book contains five major sections. In part one, “Preparing the Mind for Logic,” McInerny provides the foundational orientation for thinking logically. Here he addresses important areas such as attentiveness, truthfulness, principles for effective communication, and the distinction between ideas, words, and objects. In parts two and three, “The Basic Principles of Logic” and “Argument: The Language of Logic,” he provides the tools necessary to navigate syllogisms, to identify various forms of argumentation, and to construct an argument. Finally, in parts four and five, “The Sources of Illogical Thinking” and “The Principal Forms of Illogical Thinking,” he addresses the dispositions that encourage illogical thinking as well as the formulation of illogical thinking that is often referred to as logical fallacies.

Throughout, McInerny is clear, concise, and careful in the way that he explains logic and logical thinking. The goal of logic, he argues, is to get at the truth (19). As such, he deals with truth as if it is absolute and can be known, which is friendly to the understanding of truth according to the Christian worldview. He properly estimates the importance of logic for everyday life and everyday people. Though somewhat intimidating, familiarity with logic is necessary for accurate analysis and careful navigation through the world. His presentation of this important topic does not distort it with oversimplification. Yet he is able to articulate important concepts with the kind of clarity that is accommodated by simplicity. Even those who have never formally considered logic or who detest reading heady books will find this short, stimulating book a manageable read.

I give this book a most hearty recommendation and imagine that I will pull it off the shelf for regular review. Every person forms opinions about important matters and those opinions should be made with careful reasoning that avoids illogical thinking. I’m thankful for such a helpful book that will, I hope, facilitate meaningful conversation about whatever pressing issue is before us.